Summary of the Issue

Within Mobile Claims a user can change the thickness of the exterior walls or the interior walls within a diagram.  However, these changes are applied to ALL the exterior walls and ALL the interior walls within a diagram.  Individual walls (interior or exterior) cannot be changed to different thicknesses.   This causes issues when attempting to create a floorplan diagram when the various interior rooms have different wall thicknesses and are attempted to be connected as one Floorplan.  Further, it impacts the creation of an exterior plan from a floorplan. This document is designed to discuss the alternative solution to deal with this until it is addressed in a future product enhancement for Mobile Claims.

However, if this scenario were changed to where the interior walls for the men’s and women’s bathroom were 10” thick vs. 4” some visual issues arise.  When initially measuring these rooms the adjuster would have measured the interior of each room.  Then, when creating the rooms in Mobile Claims they would go through the standard process of creating a room, attaching it to another room in the floorplan they are building and continuing that process to create the entire floorplan.   However, with different wall thicknesses for interior and exterior wall within different rooms within a floorplan, the mathematical discrepancy comes into play and the walls don’t exactly line up.   Because the ‘math’ doesn’t match because of the inability to assign different thicknesses to walls, the user is left with gaps between rooms and, if they connect the rooms is can impact the measurements in some of the other rooms.  Note the gaps in the walls created between the rooms above the Men’s and Women’s Bathroom as well as the impact on the measurements for the Breakroom (see highlighted areas and measurements).

The Primary Goal of Diagramming

The primary goal of any estimate is accuracy.  The biggest issue that is faced with not being able to change individual wall thicknesses is that when connecting these rooms together within a floorplan there is a discrepancy that impacts the diagram visually.

Although an enhancement has been requested and added to the CoreLogic Product Development timeline (a determination is currently being made as to how and when this enhancement will be completed) the need is for a proposed solution that will work in the interim.  The proposed solutions in this document will be focused entirely on meeting the goal of estimate accuracy.  It should be stated up front that in focusing on the estimate accuracy there are some things that are of lesser important that will be impacted.

There are three possibly solutions to dealing with this issue:

1. Option #1 – Create the diagram with gaps between walls – Interior rooms with different wall thicknesses can be created and joined to make one floorplan. However, because the wall thickness cannot be changed the floorplan will have ‘gaps’ between some of the room.

Using the same scenario that diagram could be created using this option and would appear as shown below. The yellow lines indicate the ‘gaps’ that would exist between some of the rooms.

Note that the interior measurements of each room are the correct per our scenario.  Everything is accurate and the wall thickness is accounted for by these gaps between rooms.  When connecting these rooms Mobile Claims will try to create a ‘room’ out of these gaps but that room simply be deleted.  Now, although not visually ‘perfect’ the user can apply items to the rooms and still have accurate estimates because the interior dimensions are correct.

2. Option #2 - Create those rooms that have thicker walls outside of the overall floorplan diagram – This solution involves taking the rooms with different thicknesses and creating them as separate rooms NOT connected to the rest of the diagram. Using our same scenario we have been using up to this point, you can see that the two rooms with thicker walls that were causing the mathematical inconsistency and thus the problem in the floorplan, are now created outside of the diagram. The rest of the rooms are tied together in the floorplan. 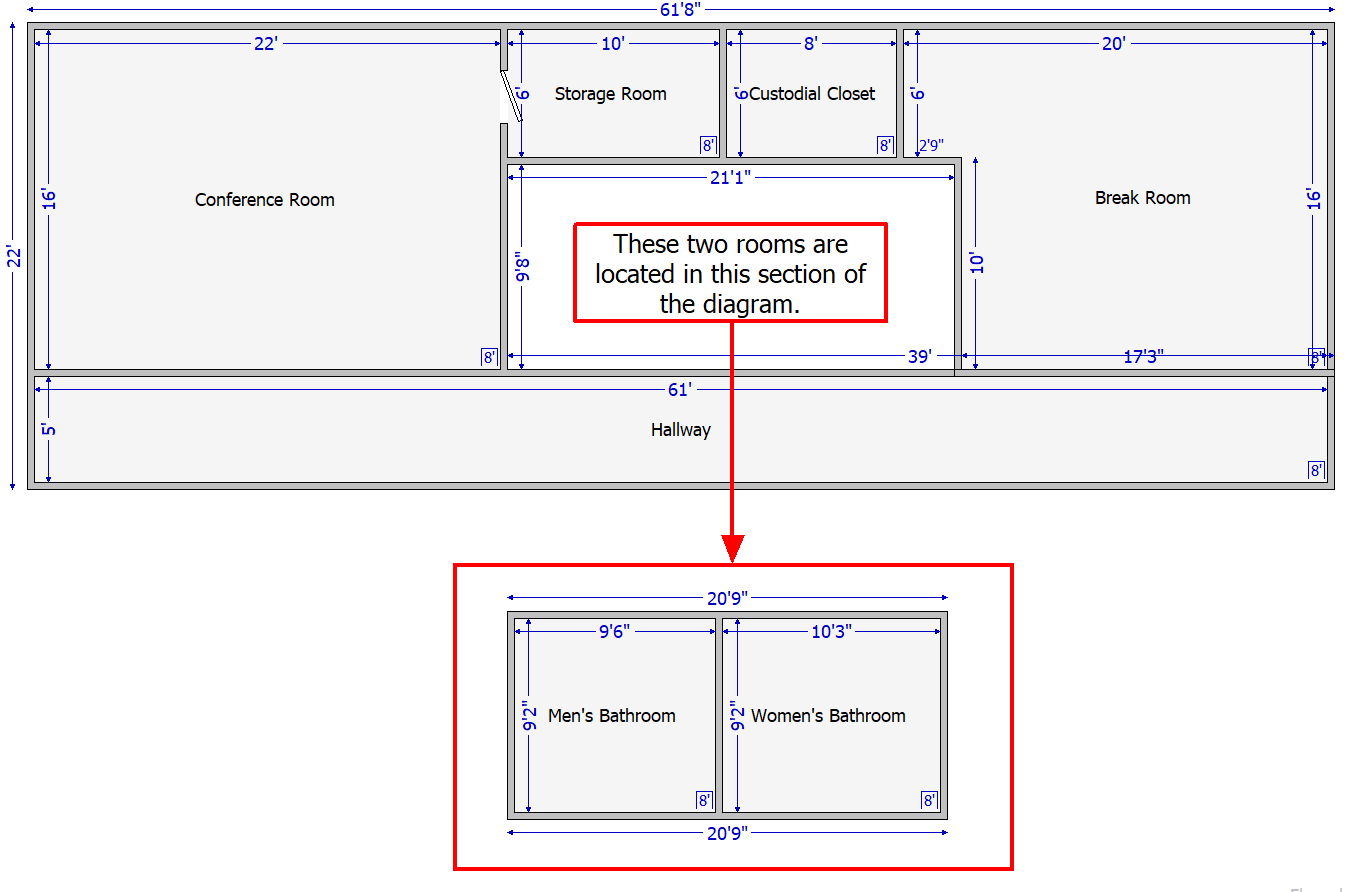 When writing an estimate for this floorplan you can still utilize features like adding estimate line items to all rooms at one time, assemblies, etc.  Additionally, the wall thickness becomes a non-issue because the estimate is pulling quantities for line items from the interior measurements.   Wall thicknesses no longer need to be changed on the diagram because that measurement no longer is it being used to calculate the estimate line items and, because it doesn’t impact the line items being dragged onto that wall (2x6 inch studs versus 2x4 inch studs) it serves no purpose on the diagram or in the estimate.

3. Option #3 - Create all rooms in the floorplan separately – This is simply going a step further than the first solution by having the user can create each room separately and then writing the estimates as normal.  This solution would be used when there are many different wall thicknesses within a floorplan that made it impractical to use options 1 or 2.  Using the same scenario, the user could create each of these rooms separately and then write the estimate.  That same diagram would look similar to the illustration below.

Addressing the Issue of Floorplans Being Used to Create Exterior Plans

One of the features available within Mobile Claims is for a user to create an exterior plan from either a roofplan or a floorplan.  This is typically done using the ‘auto-create’ feature within an Exterior Plan.  When a floorplan is available, the user simply pulls the floorplan into the auto-create window and Mobile Claims creates the full exterior of the home.

As mentioned in the third disadvantage with the above solutions, creating an exterior plan from these ‘separated’ floorplans would no longer be an option because the floorplans would now be either partial or simply contain individual rooms.

Alternative solution: Create a separate floorplan to be used to create the exterior plan of the building

- In cases such as this the user can create a separate floorplan that is designed to be used just to create the exterior plan.  No estimates would be written from this floorplan and it can even be deleted after the Exterior Plan is created if so desired.  This floorplan would be created as one large room using wither one large room that is modified from a standard rectangle room or by using the Free Form tool within the floorplan toolbar.  Once the exterior ‘room’ is created the user can go into the Wall Editor and add all the doors and windows, missing walls, openings, etc.   Then, when this floorplan is completed, the user can create a new exterior plan and the auto-create feature, utilize this ‘exterior’ floorplan (see below).

Side by Side Comparison of another Diagram Recreated in Mobile Claims

To further show how these options can be used in Mobile Claims, we have provided an example of how another diagram from an actual estimate can be drawn inside of Mobile Claims.

In the other diagram below we see walls that are angled and with various thicknesses. 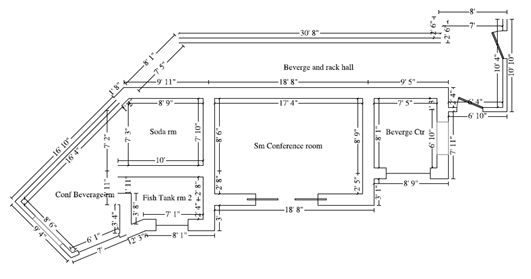 Although the diagram provided does not provide all the dimensions necessary to perfectly recreate it within Mobile Claims (openings are not sized for instance), an accurate recreation of that diagram (taking into consideration the missing measurements) is provided below.  This diagram was created using Option 2 where two of the rooms are separated because of the wall thickness issue but the other four are grouped together. 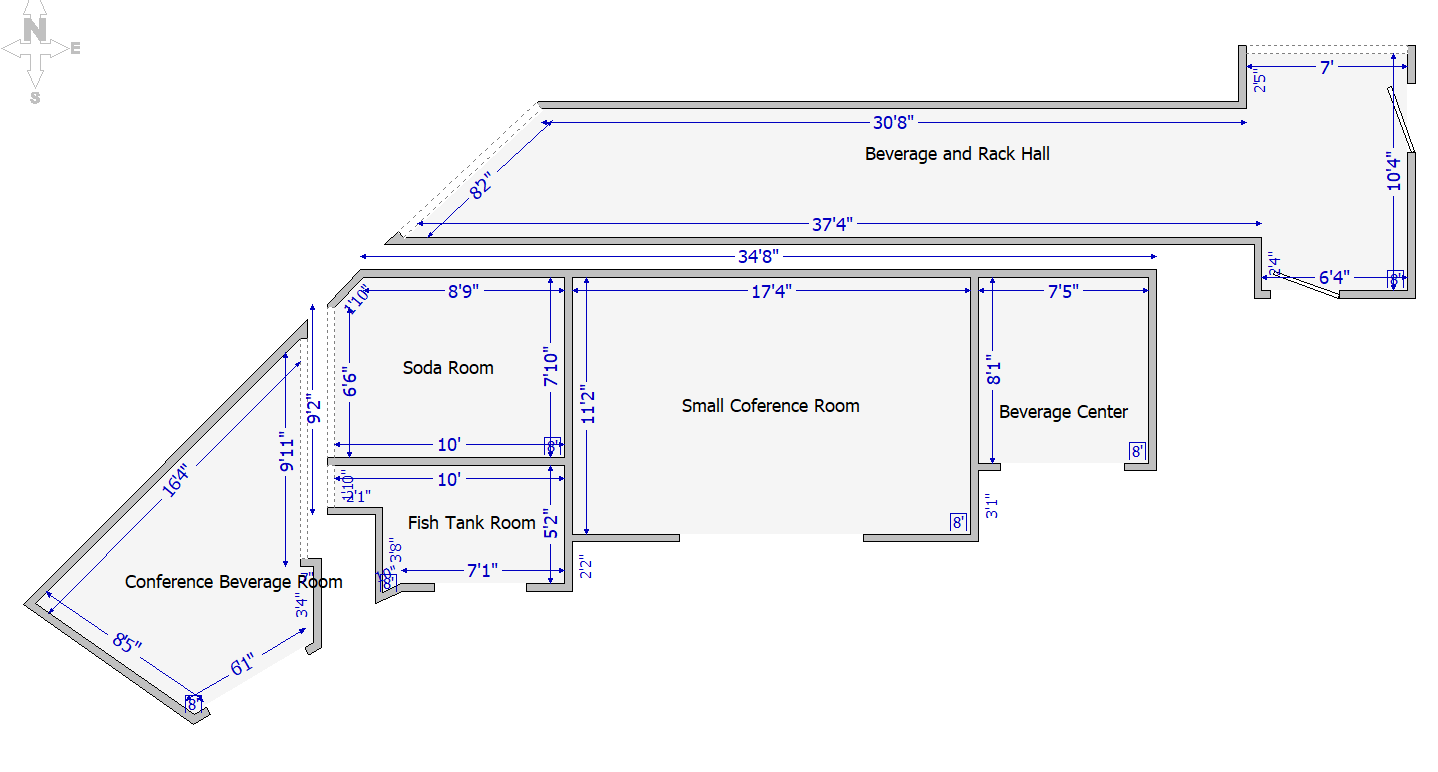 Did you find it helpful? Yes No

Send feedback
Sorry we couldn't be helpful. Help us improve this article with your feedback.

We use cookies to try and give you a better experience in Symbility Support.

If you hate cookies, or are just on a diet, you can disable them. Just note that the Symbility service is pretty big on some cookies (we love the chocolate chip), and some portions of this site may not work properly if you disable cookies.

We’ll also assume you agree to the way we use cookies and are OK with it, unless you choose to disable them altogether through your browser.